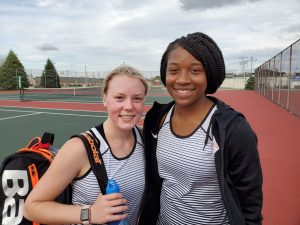 The LaPorte Girls Varsity tennis team won the Slicer Invitational Saturday at Kesling Park.  LaPorte beat Elkhart Memorial 5-0 in the first round and advanced to the finals.  After strong performances from Alaina Majors and Rachel Kaminski, it was the #2 doubles team of Molly Reed and Aniya Kennedy who clinched championship point for LaPore.  Molly and Aniya won a three-set battle 10-6 in the third set to seal the victory for LaPorte.  LaPorte hosts Lake Central on Monday.