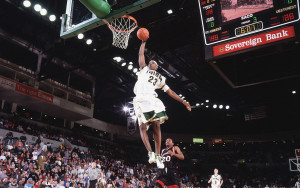 As Americans, we tend to fall in love with our rising stars who are breaking out on the national stage at a young age.  At 18, all eyes were on Patrick Kane as he started his professional hockey career with the Chicago Blackhawks. Nobody blinked twice when MLB’s Bryce Harper was selected to the National League All-Star team at 19.  Likewise, there were no calls for the U.S. Men’s National Team to pump the brakes on budding soccer star Christian Pulisic when he scored his first goal for the Stars & Stripes at the young age of 17.

Yet, in basketball, most of the top high school talent is required to follow the controversial “one & done” trend. As the rule goes, an athlete needs to be at least 19 years old to be eligible for the NBA Draft, forcing all hopeful pros into at least one year in college or a European League. The policy, instituted in the NBA CBA in 2005, was aimed at yielding more developed and matured players as draft options, instead of seeing teams draft solely on raw talent and potential, and stashing those prospects away on their bench.

Over the last decade, this rule has been a nonstop point of discussion and debate. Many appreciate the importance this rule places on attending higher education, and further developing professional skills. In addition, many college programs can benefit from knowing that the prospects they are recruiting will indeed commit to a school, rather than decide to forgo college altogether. Conversely, however, many have questioned whether forcing the likes of Andrew Wiggins, Ben Simmons and Anthony Davis to go to college for a year is really th

e right path for top-level talent. The careers of Tracy McGrady, Kevin Garnett, Kobe Bryant, and LeBron James might say no. In addition, the one-and-done phenomenon sees many top players in and out of a college faster than you can say “Karl-Anthony Towns,” rendering a college game that is often focused more on individual showcases and annual ‘big names,’ rather than cheering for programs that see players develop over 3 or 4 years. This controversy is especially relevant, as current NBA Commissioner Adam Silver recently stated at the beginning of this year’s NBA Finals that “We all agreed we need to make a change . . . It’s one of those issues we need to come together and study. … My sense is, It’s not working for anyone.” (read more on Silver’s statement) Such a change could be to do away with the rule altogether, or amend it to have caveats, such as requiring those who choose to go to college to stay at least 2 years or those who choose to turn professional out of high school to spend a year in the G-League.

So, what do you think? Should the NBA change their age requirement and allow basketball players to turn professional fresh out of high school?

Should the NBA Allow High School Athletes to Declare for the Draft?